2006 is the 10th anniversary of the Tickle Me Elmo craze. To celebrate it, Fisher Price (official toy supplier of Jack Wasser) is releasing a special commemorative Elmo, the TMX. That either stands for Tickle Me and the Roman numeral 10 or Tickle Me Extreme. Clever naming, no? Well, even more clever is the fact that the toy company is releasing almost no imformation about the TMX. Everyone who has seen it has had to sign confidentiality agreements. That dramatic silo'ed picture of Elmo is pretty much all we're getting. There have been a few statements released about how TMX takes toddler plush to a new level, and how one exec who saw it couldn't believe there were no wires. Elmo must have some serious moves, an idea also suggested by the fact that he requires 6 batteries.

So here we have a brilliantly insidious marketing campaign. What is the TMX? I must know! How can I possibly wait until September to see it? And here we also have Jack, my sweet little man who loves Elmo. What's a mom to do?

Looks like we've got a new favorite toy. Jack and I went to Caribou Coffee after work/school on Friday. They had a new toy there, a Magna Noodle. Jack took a shine to it right away. It took him about two seconds to figure out how to use the pen to scribble on it, and he was entranced. I was impressed that he was doing some genuine scribbling, so of course, he and I hit Target the next day to get him one of his very own. And how could I resist the cute Elmo and Cookie Monster version? It also makes all kinds of noises that amuse Jack, though sometimes that feature gets accidentally turned off.

Steve picked Jack up at school yesterday and started talking to the newest teacher. She reported that Jack likes to go to the other classrooms to visit the other kids. She also said that he loves to chase girls. No surprise there.
Posted by Midwest at 1:33 PM No comments:

A day of firsts

Jack turned 15 months old yesterday, and according to my email from Babycenter, this month, he should be learning all kinds of new stuff and hitting all kinds of milestones. Perhaps Jack read the email, because today, he seems to be determined to do just that. 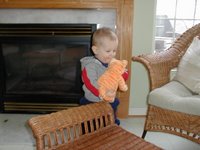 This morning, for the first time, he climbed onto the ottoman in the sunroom all by himself. He's never really been a climber, luckily for me, but all of a sudden, he just pulled himself up and onto the ottoman, then grinned at me. Naturally, he would not repeat this feat once I got out the camera, so here is a picture of him near the ottoman holding a toy. That toy, by the way, is apparently a tiger and not a tabby cat. As he was playing with it, he made all kinds of growling noises that a little tabby cat would be unlikely to make. So that clears up that mystery.
Maybe because he suddenly seemed to be all grown up, I decided to try putting him in one of the grocery carts with the car attached to the front of it. I wasn't sure how he'd deal with not being able to see me while we shopped, but I figured if it didn't work, I'd just put him in the basket. I needn't have worried, because he loved it. Steering the car and honking the horn is a heck of a lot more interesting than looking at boring old Mommy. Jack was happy and entertained for the whole shopping trip. Yay!
Posted by Midwest at 2:09 PM 1 comment:

I dropped Jack off at school this morning and helped him get settled in. Ms. Esthella dumped a bin of plastic toys onto the floor for the kids to play with. I selected a plastic dinosaur and gave it to Jack. Esthella told me that Jack absolutely loves that dinosaur. Yesterday, he spent quite a while playing with it. He sat in a corner by himself and played with it while making growling noises! Too funny!
Posted by Midwest at 9:23 AM 1 comment:

When Steve picked Jack up from school yesterday, the kids were playing dress-up. Jack was wearing some kind of cowboy hat/cape get-up and had stickers all over his forehead. One of the teachers also decorated his binky with tiny sparkly stickers. It looked awesome. See? 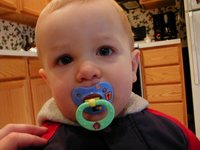 He looks awfully serious for one so festive, doesn't he?
Posted by Midwest at 9:34 AM 1 comment:

Jack has two new hobbies, one more endearing than the other. The less cute new enterprise is to try to wedge himself into very small places. That might be the corner between the table and the wall, a spot between two big toys, the space under his high chair... things like that. Then he realizes that he's stuck, so he starts to cry and whine. When we release him from his self-created prison, he cries some more, like he really misses Frustration Corner.

He has also taken lately to doing Feats of Strength, just like his daddy and his friends do when they've been drinking. Jack will find the biggest, heaviest object in the room that he might reasonably lift (say a 12 pack of soda) and will attempt to hoist it. Lots of manly grunting is involved, and if he finally does manage to pick up the object, he grins at us proudly. Last night he repeatedly clean-jerked the laundry basket, then discovered it was fun to bang it against the wall.
Posted by Midwest at 8:50 AM 1 comment:

Yesterday was Steve's birthday, and I gave him a huge basket of wines, cheeses, chocolates, and such for us to enjoy for Happy Hours out on the deck. One of the cheeses was a buffalo spice cheddar, which sounded like fun. The boys and I were hanging out in the kitchen, and the next thing you know, Jack had pulled the cheddar off of the table and bit into it through the cellophane. Then, his eyes started watering, his nose started running. It was some spicy cheese, and Jack was not happy with that at all! Steve and I managed to stop laughing for long enough to give him a saltine, which cured him.
Posted by Midwest at 8:40 AM 1 comment:

Poor Jack was really sick this weekend. He started vomiting on Wednesday, then couldn't keep any food or drink down at all. Friday morning, he was really listless and lethargic. He'd take a few steps and fall flat on his face. We brought him in to the doctor, and she said that he was severly dehydrated. He'd need IV fluids.

As hard as it is to find a vein on chubby little baby arms, it's even harder when that baby is dehydrated. Lots of poking, prodding, and screaming later, the nurses threw in the (blood-soaked) towel. We had to hold Jack for about two hours giving him diluted apple juice through a syringe to get some liquid in his body. Thank Yoda he managed to keep that down, because then they were able to find a vein. I held Jack while he got his IV. He had a hard time with it all, but Steve and I did our best to keep him calm by singing to him, putting on a Little Mermaid DVD, and encouraging him to be "strong like Wolverine."

The whole ordeal was really, really hard. I won't exactly say I was worried about him- I understood what was wrong and that he'd get better. But it was hard seeing my happy, energetic little guy just staring into space. Having to feed him like a baby bird. And having to tell a little baby to be brave.

The good news is that he made a miraculous recovery. By Saturday night, he was back to his old self again. We went out to dinner, and Jack, dressed in his HANDSOME DEVIL t-shirt, flirted with women. Then he proceeded to eat as much food as Steve and I were willing to share with him.

Yesterday, I wound up with a lesser version of what he had. I felt like absolute hell, and I hadn't gone for days without eating, so I shudder to think how Jack was feeling. For the moment, we are all healthy at Stately Wasser Manor. I really hope that Steve doesn't get it too, especially since his birthday is tomorrow.
Posted by Midwest at 3:54 PM 1 comment: